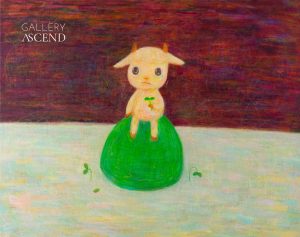 Wong Chuk Hang is one of the up-and-coming neighbourhoods filled with art & design in Hong Kong, we can see more and more art galleries opening in the area. We’re very excited to announce that a new gallery, Gallery Ascend, just opened at the Arca!

To celebrate Gallery Ascend’s grand opening, their first exhibition is “I Don’t Want To Change You” by Mr. Chen Wei Ting, a Taiwanese artist based in Tokyo. In his childhood, it’s full of cartoons and he liked to draw characters. During his study in Fu Jen University, his major is Chinese Literature and encouraged him to start writing poems. With his passion in drawing characters and writing poems, it creates the expression of his artwork today. His works are mostly graphics with acrylic paints accompanied by poems which can deliver the complete sense of story.

To diversify his profile, Chen also works with different media like video art, action art and sculpture. He took part in Nuit Blanche Taipei in 2017, an art event with lots of performance. He still thinks about the expression of his work and shows the differences between child and adult. Besides, some works he created are now in the collection of Lih-pao Cultural Arts Foundation.

Let’s visit the exhibition of “I Don’t Want To Change You”.